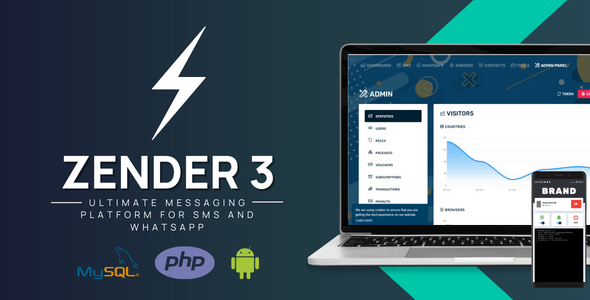 We are very excited to release this new version of zender. In this release, we have moved the WhatsApp feature to stable. This WhatsApp has added support for media messages and other types. It also now requires self-hosting of the WhatsApp server binary.

We are really thankful to our customers who kept on supporting us during the past few months. It was really tough for us because of the multiple financial issues we had due to fraudulent sponsors.

This update also includes a campaign management system. When you send bulk messages via SMS or WhatsApp, a campaign log is created on a separate page. The campaign can be paused, resumed, and deleted. More plans for the improvement of these features are currently on the way.

We have also updated the gateway app. The FCM part is now more optimized and faster than ever.

It is also now possible to limit the message sending of the devices per day or month. This can be modified when you edit the device. The ability to link a device to multiple user accounts was also removed because it was causing critical issues with the partner system.

The zender plugins are now updated to support v3 of zender. For the Perfex and WooCommerce plugins, we added the WhatsApp capability. A plugin for Rise CRM will also be released in the coming weeks or sooner.

We have also created a tracking system for our customers. On this tracker, you will be able to see our progress in developing Zender. We hope this will reduce the anxiety caused by our sudden silence when updating Zender. To access the tracker, please click the "DevTracker" button in the sidebar of the support forums.

Migration files for v2 to v3 are now available. Please follow the migration instructions in the official documentation.

Update instructions for v3.1.2 to v3.3 are also located in the official documentation.

Changelogs / Zender
Prev Next
Support Offline
Our customer support is currently unavailable because our team is moving to a new office location.